It’s been a breakthrough, banner year for New Energy Technologies. I’m proud to share many of our 2013 – 2014 accomplishments and development goals planned for the year ahead.

As I sit to write today, I want to personally thank you – our shareholders – for your continued, strong support in developing the world’s first-of-its-kind see-through SolarWindow™ technology. 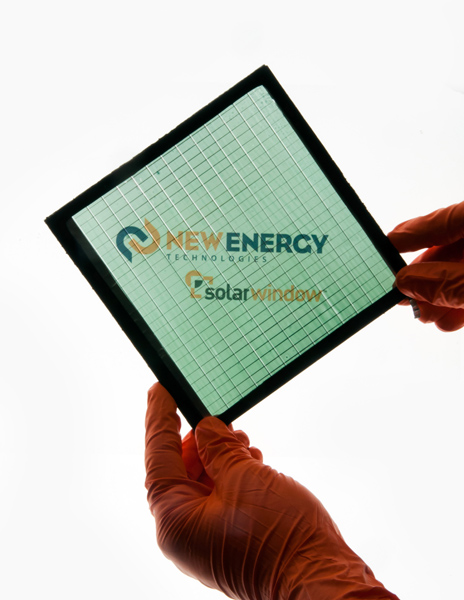 Since the early days of presenting our first liquid, electricity-generating coatings and dark, small-scale prototypes to this year’s highly-transparent and record-breaking modules, you’ve been a part of each milestone. On behalf of my team, I thank you for that. We could not progress toward commercialization without your commitment.

You’ll be happy to know that over the last two years, we’ve set amazing records with our modules, raised the bar on our technical achievements, and even displayed our SolarWindow™ modules to members of the United States Congress on Capitol Hill.

Our SolarWindow™ technology continues to show strong progress in development, and is picking up pace. At a time when energy demand is rising, there is a tremendous opportunity for SolarWindow™ coatings to generate electricity on the many acres of glass surfaces available on tall towers and skyscrapers. This year, our engineers and scientists focused on size, aesthetics, and power production. The results have been impressive.

Using the Company’s proprietary power production model, engineers estimate that when installed on all four sides of a 50-story building:

We previously unveiled our biggest-ever working module, which was fabricated through a collaborative partnership with the U.S. Department of Energy’s National Renewable Energy Laboratory (NREL), one of the world’s leading renewable energy laboratories. At the time, this module was more than 14-times larger than previous OPV devices fabricated at NREL. This year, our continuing partnership with NREL led to the unveiling of our newest, high-performance SolarWindow™ modules, which are 35% larger than previously unveiled modules. 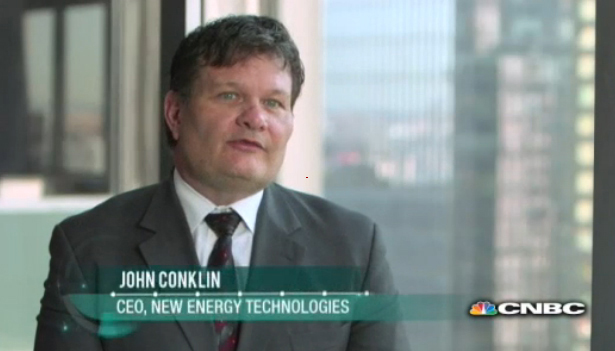 As CNBC explains, SolarWindow™ is a “’first-of-its-kind’ technology that could turn the buildings we live and work in into self-sufficient, mini-power stations.”

Our numerous breakthroughs this year have captured the attention of The Huffington Post, CNBC, Renewable Energy Magazine, CleanTechnica, TechRepublic, and The Washington Post, among others.

As our SolarWindow™ technology progresses, we anticipate even greater coverage.

Keep in mind that our SolarWindow™ technology is being developed as a Building Integrated Photovoltaic (BIPV) renewable energy source. The BIPV market is expected to have a tremendous growth rate of 41% through 2016. That growth, combined with the global market for coated flat glass, is expected to reach nearly $29.2 billion by 2019.

This escalating energy demand and growth in the glass market comes at an essential time, as we advance toward market-ready SolarWindow™ products.

Over the last two years, our scientists and engineers have achieved numerous milestones. Not only have we set a new record in power production, but we’ve also made significant breakthroughs in scaling up the size of our modules. We have successfully increased efficiency; and improved manufacturability, and transparency, constantly improving our ability to harvest energy and generate electricity.

We have also unveiled some of the most powerful electricity-generating modules we’ve ever seen. In doing so, we’ve attracted some influential industry leaders, like Mr. Curtis Watkins and Mr. Kelly Provence.

Mr. Provence is one of the most credentialed solar PV and installation experts in the field, holding three North American Board of Certified Energy Practitioners (NABCEP) certifications. The Interstate Renewable Energy Council (IREC) awarded him Master Certified PV Trainer status, as well. His knowledge of systems for integrating and installing SolarWindow™ modules into building architecture is invaluable.

Mr. Watkins works with Duke Energy’s Emerging Technology Office, one of America’s largest utility companies. He’s responsible for testing and verifying new technologies that have the potential to become part of a portfolio of energy solutions. He brings expertise in the utility and municipal energy industries and guidance in the development of strategic partnerships.

These are exciting times, as our technology attracts some of the most substantial names in the industry. Things are even better because of our dedicated team of scientists, engineers, and employees’ remarkable determination.

With their support, I’m happy to say that our Company continues to advance SolarWindow™ technology through its Cooperative Research and Development Agreement (CRADA) with NREL. Leading our research efforts is Dr. Scott Hammond, our Principal Scientist, who continues to work closely with NREL scientists to further develop SolarWindow™ electricity-generating coatings into commercially-viable products. Scott has been instrumental in accomplishing all of our technology development objectives, to date.

Two years of significant accomplishments and record-setting breakthroughs have brought us closer than ever to commercialization.

In July 2013, we more than doubled our U.S. and international patent filings in just 12 months for protection of our proprietary SolarWindow™ technology.

By December 2013, our team was awarded the 2013 Energy Innovation Award from the Energy Business Review (EBR). We were recognized as the most promising global energy project of the year. It was a tremendous reflection of our hard work and dedication to advancing our SolarWindow™ development.

In January 2014, our scientists successfully increased power and created a broader selection of SolarWindow™ module colors under high-demand by architects and building designers.

We then set to work on unveiling our next generation, high performance SolarWindow™ working prototype within the following quarter, successfully achieved in March 2014.

We built our largest and most powerful SolarWindow™ modules, fabricated in neutral colors to address tall-tower and commercial building glass requirements.

Ninety days later, we set a new record for generating electricity while remaining see-through with more than 50% greater power than other industry attempts. 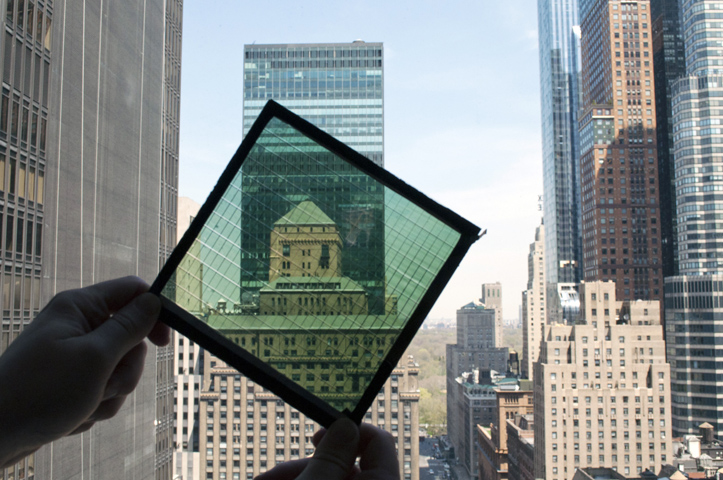 Estimated to Generate Up to 50-Fold Electrical Energy Benefits

By June 2014, our engineers developed a proprietary model for estimating the amount of electrical energy and environmental benefits SolarWindow™ prototype modules may provide. Our model showed that SolarWindow™ modules could outperform conventional rooftop solar by as much as 50-fold.

In September 2014, NREL experts presented our SolarWindow™ modules to staff and members of the U.S. Congress as part of the first-ever National Lab Day on Capitol Hill, co-sponsored by the U.S. Department of Energy.

Dr. Scott Hammond was selected to present our SolarWindow™ technology at Energy Harvesting and Storage USA 2013, the world’s largest annual conference and exhibition of its kind. Dr. Hammond was also invited to present at the 2013 Materials Research Society Spring Meeting Exhibit. We then presented our SolarWindow™ technology to the 2014 InterSolar North America Conference, the most widely attended solar exhibition in the United States.

Where do we go from here?

What sets see-through SolarWindow™ coatings apart commercially is the ability to generate electricity not only in sunlight, but also using artificial light sources, diffused light and even in shaded areas. This allows our modules to be commercially installed on all sides of a skyscraper, turning the entire building into a power generator. Conventional rooftop solar systems cannot do that.

Moving forward, we’re heading into 2015 with solid momentum of technological achievements. Our expanded intellectual property portfolio continues to play a crucial role as we pursue a greater number of industry and research partnerships in our push toward commercialization.

There is still a lot of hard work to be done, but the complex, early discovery proof-of-concept research is long behind us.

Our team will continue to improve power production and strive toward greater efficiency with our SolarWindow™ modules. We are further enhancing the transparency and uniformity of our coatings, developing SolarWindow™ modules in glass colors and shades in high demand by architects and building designers.

Also key to our future development goals is scaling up the size of our modules and developing new fabrication techniques for applying electricity-generating coatings onto glass. These steps will help prepare SolarWindow™ coatings for low-cost, high-speed fabrication using roll-to-roll and sheet-to-sheet manufacturing processes.

With your ongoing support, we look forward to setting new industry records, achieving important milestones, and attracting global attention. The development of our Company and SolarWindow™ technology will put New Energy Technologies in a strong position to deliver greater value to you, our shareholders.

Rest assured that shareholder value is, always has been, and will most certainly remain, an important priority for the New Energy team. With this in mind, I promise to continue our tradition of proactive shareholder outreach in 2015 and keep you updated on our major advancements.

Whether by way of press releases, media interviews, or industry and scientific presentations, we will continue to attract positive coverage for New Energy Technologies and our SolarWindow™ technology.

You have my personal commitment, and the commitment of our Board of Directors and Advisors, employees, and scientists who are working to advance our technologies and strengthen shareholder value. As we approach our goal of commercialization, we remain focused on our objective of positioning our SolarWindow™ technology as one of the greatest future energy innovations.

Thank you for your confidence and ongoing support. Our best days are ahead.

No statement herein should be considered an offer or a solicitation of an offer for the purchase or sale of any securities. This letter contains forward-looking statements that are based upon current expectations or beliefs, as well as a number of assumptions about future events. Although SolarWindow Technologies, Inc. (the “Company” or “SolarWindow”) believes that the expectations reflected in the forward-looking statements and the assumptions upon which they are based are reasonable, it can give no assurance that such expectations and assumptions will prove to have been correct. Forward-looking statements, which involve assumptions and describe our future plans, strategies, and expectations, are generally identifiable by use of the words “may,” “will,” “should,” “could,” “expect,” “anticipate,” “estimate,” “believe,” “intend,” or “project” or the negative of these words or other variations on these words or comparable terminology. The reader is cautioned not to put undue reliance on these forward-looking statements, as these statements are subject to numerous factors and uncertainties, including but not limited to adverse economic conditions, intense competition, lack of meaningful research results, entry of new competitors and products, adverse federal, state and local government regulation, inadequate capital, unexpected costs and operating deficits, increases in general and administrative costs, termination of contracts or agreements, technological obsolescence of the Company's products, technical problems with the Company's research and products, price increases for supplies and components, litigation and administrative proceedings involving the Company, the possible acquisition of new businesses or technologies that result in operating losses or that do not perform as anticipated, unanticipated losses, the possible fluctuation and volatility of the Company's operating results, financial condition and stock price, losses incurred in litigating and settling cases, dilution in the Company's ownership of its business, adverse publicity and news coverage, inability to carry out research, development and commercialization plans, loss or retirement of key executives and research scientists, changes in interest rates, inflationary factors, and other specific risks. There can be no assurance that further research and development will validate and support the results of our preliminary research and studies. Further, there can be no assurance that the necessary regulatory approvals will be obtained or that SolarWindow will be able to develop commercially viable products on the basis of its technologies. In addition, other factors that could cause actual results to differ materially are discussed in the Company's most recent Form 10-Q and Form 10-K filings with the Securities and Exchange Commission. These reports and filings may be inspected and copied at the Public Reference Room maintained by the U.S. Securities & Exchange Commission at 100 F Street, N.E., Washington, D.C. 20549. You can obtain information about operation of the Public Reference Room by calling the U.S. Securities & Exchange Commission at 1-800-SEC-0330. The U.S. Securities & Exchange Commission also maintains an Internet site that contains reports, proxy and information statements, and other information regarding issuers that file electronically with the U.S. Securities & Exchange Commission at http://www.sec.gov. The Company undertakes no obligation to publicly release the results of any revisions to these forward looking statements that may be made to reflect the events or circumstances after the date hereof or to reflect the occurrence of unanticipated events.